Hoka One One Speedgoat Review 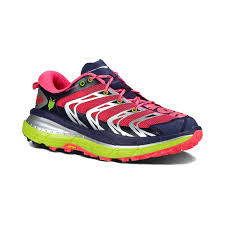 The Speedgoat is a new trail shoe from Hoka One One. It gets its name from the Speedgoat 50k race in Utah, which is put on by ultra stud Karl Metzler.

The Speedboat 50K is known as being a rough and rugged race. The shoe was designed with this race in mind, aiming to build a shoe that could handle the most technical of terrain.  The Speedgoat has less stack height than other Hokas so it sits much closer to the ground, allowing for the shoe to be much more nimble on techy trails.  Most Hoka’s use a laughable amount of rubber on the outsole that disappears in a 100 miles or so, no so with the Speedgoat, Hoka layered the outsole with a hefty amount of rubber that should hold up to a good amount of abuse.

The midsole and outsole of this shoe are really pretty impresive. The midsole consists of a thick layer of EVA foam that is a bit firmer than other Hokas and has a relatively responsive feel.  The ample amount of cushioning combined with a hefty rubber outsole provides a good amount of protection from rocks and debris.

As I said, the outsole of this shoe is what sets it apart from other Hokas. It has 5mm lugs (Hoka advertises both 4 mm and 5 mm on their website) in an aggressive pattern composed of Vibram rubber.

Vibram rubber is high quality and it is nice to see it incorporated into this shoe. This rubber is durable and grips like a beast. I have not tested this shoe on snow but in all other conditions it had exceptional traction. It has just as good traction on wet, muddy trails as it does on dry, dusty trails.

When you plant your foot in this shoe it digs in and holds on to the point where you actually notice that your able to generate more torque, especially when running uphill.
The upper of the shoe is a bit on the narrow side but the upper has a lot of volume to it.  If you try the shoe on and the upper feels a bit too baggy I would suggest throwing in an extra insert to take up some room.  This trick has worked for me with a number of Hokas in the past.

If you love Hokas but have found them to be too cumbersome on trails or lacking in grip than this may be the shoe for you.  Don’t be afraid to use different insoles to get the fit dialed in for your foot.