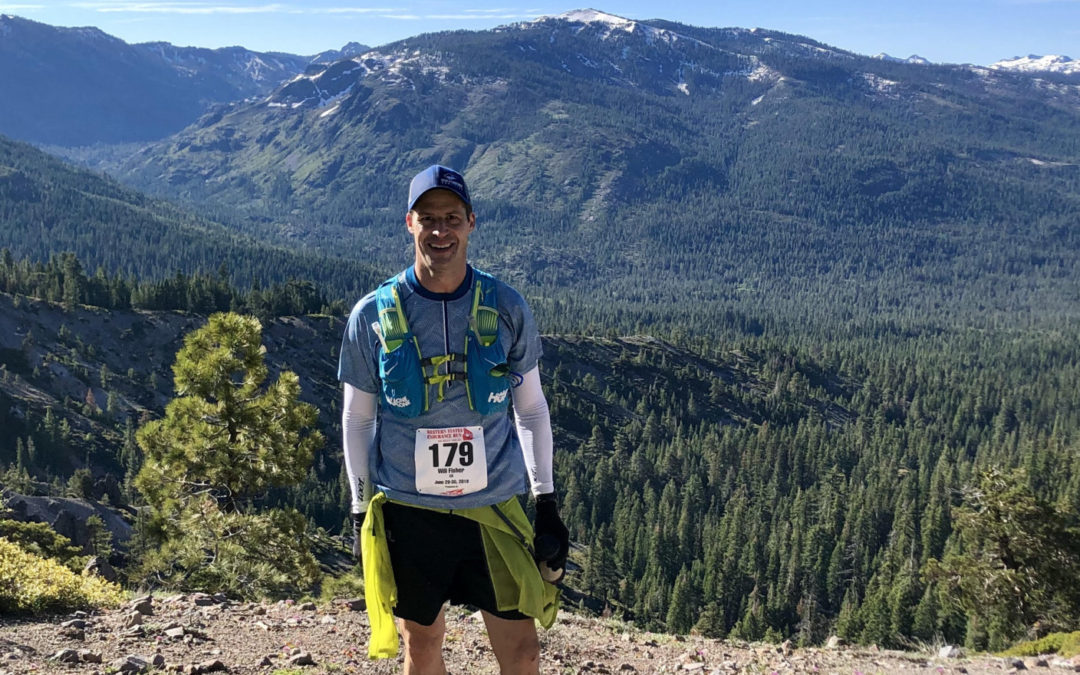 Local ultra-runner and pastor (you can call him Rev Run) Will Fisher ran the iconic Western States 100 this Summer. Below is a report of his epic adventure.

During my previous six 100 mile finishes, I had to rely almost exclusively on my own fortitude to get me through to the finish. As I ran all of those as a solo runner, I had nobody I could turn to when challenges arose, whether it was dealing with a snowstorm at the Bear 100 in 2016 or heat-induced nausea at Angeles Crest 100 in 2017. Because, I was a solo runner, I learned just how strong I could be.

This season was going to be a little bit different. I first heard the good news back in December that I was finally picked in the lottery to run the Western States 100, the Super Bowl of ultrarunning. The course runs point to point, from Squaw Valley, California to Auburn, on the outskirts of Sacramento. Once cresting the Sierras, with Lake Tahoe in the rear view, the trail flits in and out of the canyons of the American River, climbing in total about 19,000’ and dropping 24,000’ by the finish.

I made the intentional choice to run with crew and pacers this time, more out of a desire to share in what would likely be a really fun day plus. So, I lined up my teammate from this past winter’s Power of Four ski mountaineering race, Kevin Hadfield as a pacer and father, Jerry, as my crew, as well as a proverbial guy I met on the internet, named Stephen Anthony as a second pacer.

My training followed the same pattern that had worked for my other mountain 100 finishes: lots of cross training in the winter and slowly building in more running volume as the season progresses. However, because the Western States 100 is typically raced in hot conditions, I also did some heat acclimation training in the immediate weeks before the race. That meant hot yoga classes, a couple sauna sessions, and running in the middle of the day, dressed like it was the middle of winter, looking much like a madman.

As race day approached, it was apparent from the weather forecast that heat would not the issue that it normally is for this race. However, a different challenge would emerge in the early going: the same winter snowstorms that made it such great winter for skiing here also fell there, leaving deep snowdrifts to negotiate. All in all, however, it would be good conditions to take on this iconic race.

From the starting gun, I went straight to executing my race plan: start easy. During the Power of Four, Kevin and I developed a quick phrase to remind us to pace ourselves: “Yacht Rock” (as in the satellite radio channel that plays mostly melodic soft rock from the late 70’s through the 80’s; as opposed to speed metal). So, with Michael McDonald and Air Supply songs already playing in my head, I began the first long climb up the ski slopes, making sure I was behind people that I was probably faster than. I continued through the canyons with this same feel, going easier than I thought I should be. If I ever felt like pushing the pace, I would just remind myself, “Olivia Newton John” or “Steely Dan”. And I kept snacking, trying to build up a calorie buffer in case I got nauseous later in the race.

Despite the more temperate weather conditions, the canyons on the course still got pretty hot. I was constantly putting ice in my shirt (and thanking myself for doing the heat training). And I remained committed to conservative pacing (“Hall and Oates!”, “Christopher Cross!” if I ever felt tempted to race against another competitor). Despite easy pacing, I would eventually run into some stomach issues about halfway. Nonetheless, when I got to Foresthill at mile 62, I was still feeling decent. I was also in 209th place, a pretty pedestrian result for someone used to being closer to the front end of a race, but I wasn’t concerned (considering the caliber of competition at WS100, that was expected).

At mile 62, the real race started. I picked up Kevin as my first pacer, just as night fell. After a short stint of post-vomit walking, we were running under the glare of our headlamps. We just thought about moving from aid station to aid station, trying to run anything that was flat or downhill, hiking anything uphill. While nausea from earlier continued to dog me, I kept drinking (as Kevin would frequently remind me). While I wasn’t able to hold much down, the earlier commitments to both conservative pacing and aggressive eating were starting to pay off. I felt like I had plenty of gas in the tank. Cheered by Kevin every time we were able to run a stretch, I moved on through the night. It became apps that we were passing other runners; a lot of them.

Kevin got me to the big river crossing at mile 78, where I was support meet up with Stephen. Something went wrong: Stephen was still napping, not anticipating our early arrival. We couldn’t find him, so Kevin continued with me further. Eventually, when Stephen caught up to us, I thought Kevin was going to strangle him. Anyway, once we reached the next aid station, we smoothed everything out and got back to the plan. In the remaining 22 miles, Stephen, an aspiring personal injury lawyer, kept me entertained in his thick New England accent with stories. We continued to pass people, sometimes like they were standing still. (In some cases, they actually were with some sleeping in cots in aid stations or puking and one competitor actually curled up asleep on the side of the trail.) As day dawned, my stomach began to suddenly feel much better. In the last few miles I even took in a gel or two. And right up into the streets of Auburn, we continued to pass other runners. In fact, Kevin and Stephen paced me to pass 57 competitors in the last 38 miles. They got me from 209th place to 162nd out of 369 runners.

When I finally finished, I had a new 100 mile PR: 26 hours and 22 minutes. That feeling of being overcome with emotion was definitely present; especially overcome with gratitude to the race and all the volunteers for the experience, but especially to Jerry, Kevin, and Stephen for bringing forth my best effort. While, I learned just how much inner strength I had in reserve at my previous 100s, my experience at Western States taught me just how much strength I can draw from those around me, from those who support me. In a lot of ways, my Western States experience was more real than my other 100 finishes in that, as fashion icon Tim Gunn said, “Life is not a solo act. It’s a huge collaboration, and we need to assemble around us the people who care about us and support us in times of strife.” Or in times of racing the Western States 100, I suppose. (Yes, I probably should have quoted something from Kenny Loggins’ 1979 LP ‘Keep the Fire’ but I’m trying to get those kinds of songs out of my head!)

You have Successfully Subscribed!