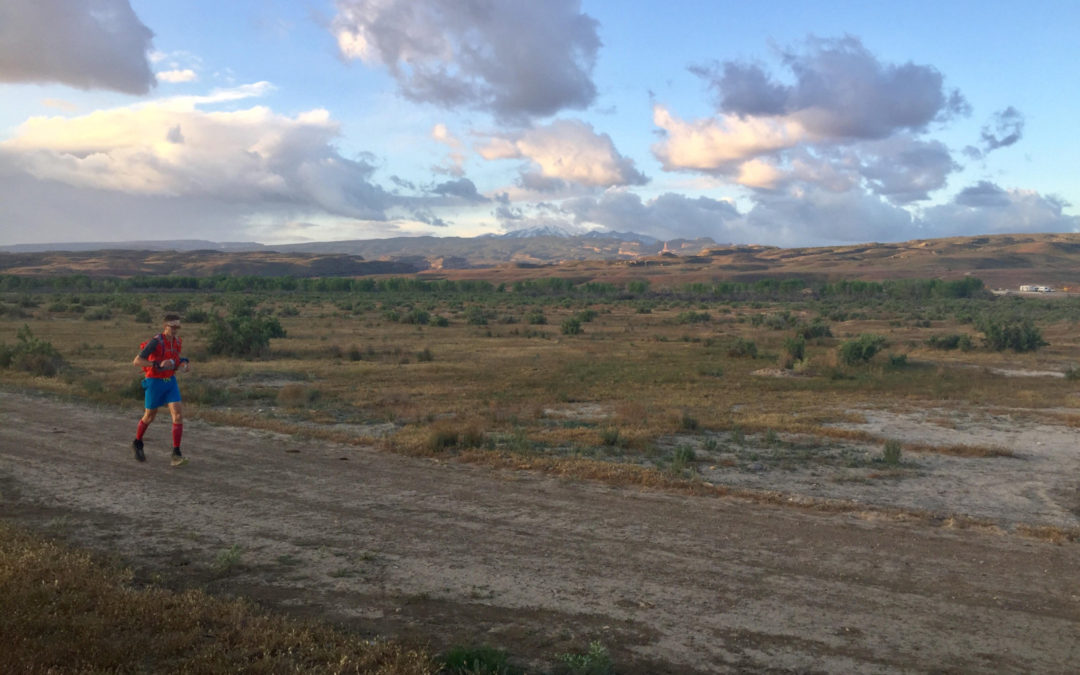 Our new employee Kevin Hadfield decided to put his vacation time to good use, snagging a self supported FKT of the 140 mile Kokopelli Trail. During the effort he had to deal with massive temperature swings, hallucinations, and battered feet.

I’m happy and sad all at once. I’m psyched to have finished the Kokopelli but sad that it’s not been a shared experience. I’d spent all but a few fleeting moments of the past 33+ hours completely alone. I’d been cycling between vivid hallucinations for about 14 hours with increasing frequency and intensity. I rounded a corner and saw 2 headlight bulbs in the distance. My wife ran up to me and said “You’re here! You’re almost to Slickrock trail! Where do you finish?” I said “Are there 2 of you?!? I don’t really know??? How about that big sign?” I redlined the last 200 or so meters to the big Slickrock Bike Trail sign on Sand Flats road at a breakneck, 12 minutes/mile pace. That sucked!!

The Sunday prior to takeoff I’d wrapped up 4 big bottles of water with snacks of all sorts and left them strategically along the ~140 mile route from Loma to Moab (I dropped 1 more cache at Rabbit Valley on day of). I labeled them for my trip and crossed my fingers that another trail user or desert dwelling beast wouldn’t nibble on my caches. I was preparing to break the fastest known, self-supported Kokopelli trail run time set by Paul Pomeroy in 2002. The time that stood for 17 years was 37 hours and 33 minutes; I was shooting for under 36. This was not my first rodeo on “the Koko”, I’d taken off 2 times previously with the intention of running to Moab (May ‘17 and March ‘18) only to fall short. Whether misplaced or not, I’d blamed my last failure on a partner I’d started with and decided that the trail was too long to be going by anyone else’s schedule; this had to be a solo attempt.

Backing things up a bit, I had no intention to try the Koko again in 2019. My wife and I had a running/hiking road trip planned for the west coast, California into Oregon and then finishing up in the Wind Rivers of Wyoming. We were just planning to run at highlight areas and trails along the way. We figured out pretty quickly that the alpine was still covered in snow so I started thinking of alternatives. I was only 3 ½ weeks out from a 24 hour race in which I ran 112 miles so the Koko didn’t seem doable but after a couple highlight areas (Marin, Sonoma Coast, Redwoods) and another decent long run (Lost Coast Trail), I thought… well maybe?? I floated the idea to cut our trip short and head home for a Koko attempt instead of the Winds and Liesel, my awesome wife, was totally game. 12 or so hours later we were headed East to Colorado. I was committed to an impromptu Koko run with a hot, hot forecast (Bleh! I suck in the heat!)

By Thursday night, the weather forecast had changed for a better run and I was stoked! I took off a bit later than 4:55PM on May 16 with my caches placed and I was in it for the long haul. The Kokopelli loops + Lions and Troy Built are beautiful and so worth doing in the light. I got wicked hot in the first 2 hours of the go and my stomach completely flipped before I’d even made it to the Rabbit Valley road… that set the tone for the run as I struggled physically from that point onward. I saw my first rattlesnake of the trip on the climb up to Rabbit Valley rd.

I cruised through Rabbit Valley, across the UT/CO border and into the desolate desert section between essentially Rabbit Valley and McGraw Bottom. I prefer doing this bit at night as it’s boring and hot. I pissed off a rattlesnake that scared the crap out of me and saw a bunch of scorpions and spiders between Rabbit Valley and Westwater Rd… summertime in the desert… Yikes! There was some rain and a cool breeze. I was mostly moving well but I felt super hot and sick until early morning.

Sunrise on Friday was beautiful and it ushered a great new day with a forecasted high in the upper 60s with a breeze… in May?!? in the desert?!? AWESOME!!! I ran by Liesel somewhere around here and she snapped some photos and updated me on her mountain bike adventures 🙂 McGraw Bottom went by, Owl Draw, Dewey Bridge… I felt like crap but I was making good time even though I was walking all uphills. I got to a cache pretty early on Friday and sat down to apply some sunscreen and sort myself a bit… that was a mistake because I started to get the stares really badly and ended up stationary on the trail for around 20 minutes… I had the 35 mile section with all the fun bits (Rosegarden Hill, Polar Mesa) before my next cache. The road out of Fisher Valley to Polar Mesa seems to go on forever… no matter how many times I’ve been out there, it always feels like an eternity. I got to the last cache ~24 hours into the go and I’d started hallucinating little animals in the rocks and trees somewhere between Top of the World TH and Polar Mesa Rd. junction. I sat down at that cache too and almost passed out… I may have briefly dozed off but quickly I was off and shuffling. My wife checked in on me around Bull Draw as it was blizzard conditions but I was determined to cruise through there and not get stuck (‘18 attempt ended here… pitifully… it was ugly…). I bombed the road down to Castle Valley and ran into Liesel again at the left turn up La Sal Loop Rd. She assured me that there would be cheeseburgers, pizza and beer at the end! Yay!

The La Sal Loop Rd. climb is challenging 115+ miles in! The sunset over Castle Valley was one of the best and I’d left the snow so things were looking good. I had a couple battery issues on the road, my phone had frozen in the blizzard and one of the Core batteries in my bag wasn’t great (died in 1 hour)… I have an awesome little mobile charger, anyone doing long/multi day trips should get one (this is also how I keep watch charged). I was hallucinating badly at this point… the white road stripe I was walking was a black and white comic strip!!! The entire 6ish miles up!!! There were all sorts of shadow beasts at one of the switchbacks but I’m pretty sure they weren’t actually real.

Once at the Kokopelli turn off, I sat down briefly on the Forest Service bathroom floor and got myself sorted for what I thought would be a cruise to the finish. Unfortunately, my legs and mind were fried. I had some trouble following the path (It’s pretty much a road!!! Ha!). The road seemed to go on forever… I watched Scott and Nick’s time tick by and felt desperate for the end. The section is so runnable but I’d left my legs on Polar Mesa. There were wild animals EVERYWHERE I looked. Even in the moment I knew they were delusions but the mind is being constantly tricked and challenged… it becomes hard to handle after so long. I kept moving forward eating all of my remaining foods and sucking my Camelbak dry… “…when will this end?!?” I passed a group of 5 McDonalds “fry kids” on one last turn and there was the light(s). Onward a bit more and BOOM! Finished! 33:21:23! New self-supported FKT.

I was so loosely connected to reality that I had to confirm what I was actually seeing (Unknown to me, my parents drove over to watch me finish…not pretty)… my family came over to the Slickrock finish and we shared the moment for a bit. In that moment, I had every emotion but mostly just relief of finishing and a tinge of disappointment. I’m still trying to sort the emotions and what they mean for me and the Koko. Just some of my thoughts: Maybe I’ll run it again in reverse… can I do it faster? Why did I even do that? Nobody said this is easy… Nobody said it would be this hard. I’m never running that stupid thing again! This really is a better trail by bike.

I had pizza, a cheeseburger and double IPA to finish it off. The beer was so appropriately named… Eddyline Brewery Epic Day IPA.